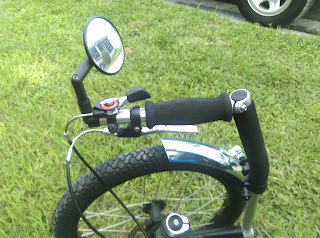 I've been meaning to upload pics of my trike mods for a long time, but I always seem to have at least one part of it disassembled when I think about taking photos.

Anyway... here's my first "trike mod" pic: of my right-side handlebar or control handle. You can call it either one, I suppose. That's a big -- 4 finger - brake lever, and a super-cheap *friction* Sunrace shifter (I have 24 gears, 3X8) hat I like better than either the OEM grip shifters or the popular, "newer" bar-end ones -- almost all of which are indexed.


The Sunrace shifters sell for $10 to $15, but to me (and many others) they're at least as good as shifters that cost $50 - $100.  I'm old-fashioned, and I like feel of a friction shifter because I have no trouble feeling the chain "drop onto" the correct cog. And small, essentially subconscious tiny adjustments when shifting mean my chain is always exactly in alignment with the stars -- and gears -- which means my drive train is silent except when shifting. I like a quiet drivetrain.

And that's a Mirrycle "mountain bike" mirror. I have them on both sides. I fold them in for edging through tight places, like between our porch and my wife's car when I go in or out of our carport. They are the best cycle mirrors I've ever had. Period. A tiny bit of convex curvature, but not enough tp make objects in the mirror appear much farther than they really are. And they do not have the bane of cycle mirrors: vibration. Vibrating mirrors are hard to look at, so this is important to me.

Three other notes about my handlebars

The first is about the silver (stainless) 90 degree tubes on my brake and shift lines. They are common-as-mud and nearly as cheap (as mud) brake noodles. Super bike repair/builder dude Kurt Callahan suggested this mod. Those noodles keep my lines under control -- and look slick, too.

The second note is the soft grip. I like foam handgrips. I'm getting a bit of arthritis and like to keep my hands comfier than they would be on hard plastic grips. I bought them from Ryder Bikes, an excellent local bike shop I try to patronize as much as I can. I had the longer foam  grips you seeon the vertical bar "in inventory," you might say. Amazon and most of the online bike stuff suppliers carry Sunlite foam grips. I like to have them anywhere I might want to grip a handlebar. Wet their insides as little with water and they slide right on, then stay there happily after the water evaporates.

Third and last is the pair of bar ends

I get these from BicycleMan, which has a lot of cool stuff others don't, and now and then scores some super deals, one of which 'll talk about in another post.

Why I did the handlebar mod

My original idea was to add a short horizontal bar to make getting my fat body on and off the trike easier and more comfortable. Then I realize that I spent a lot of my riding time with my hands on those bar ends. Hmm..... it was no great stretch of the imagination to envision those "balance bars" as my primary control handlebars. So I tried it that way. Then went back to the typical trike "vertical" control because I wasn't sure, but after a short time using the vertical controls, yes. I was sure.

This is something that may not be for everyone, but it works for me -- along with a few other mods I've done that I'll describe in another post, another day.

My "base" trike is a Trident Spike 2. I got mine used,very cheap, and it was cheap because it was in crummy condition. I have it all fixed and upgraded now. I've done some other things besides the handlebars. They are all custom-for-me, so they may not suit your tastes. But if I give you an idea or two, that's great.


Detail shots of the handlebars
with hands on the brake levers.
Note that the "flat" bars work
because my seat is more than
6" higher than the highest
normal seat position on a
stock Trident Spike. 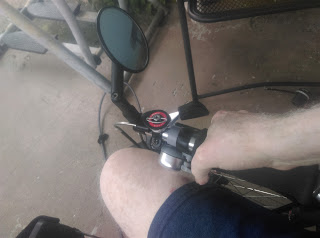 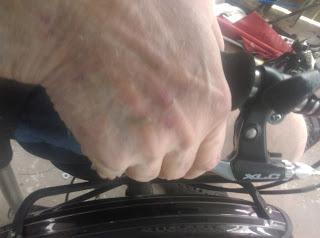 Handlebar position is as individual as the distance between
your seat and your pedals. You may be satisfied with your
handlebars the way they came from the factory. But if not,
why not set things up exactly the way *you* like? :)
Posted by Unknown at 6:59 PM