Trike Rider Hydration on the Cheap 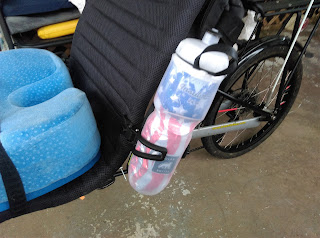 This is a 24 oz. insulated Polar Bottle in a Swagman beverage holder attached to the side of my recumbent trike's mesh seat. The Polar Bottle is simply wonderful. It's soft and easy to drink out of, and fits nicely in a standard bottle holder -- except it's tall, which is a problem in some cup holders. The Swagman  holder is straight and sturdy, so no problem. I *could* install it with the bottle straight-up vertical, but letting it stay in the plane of the seat is stronger.


The Polar Bottle doesn't insulate as well as a solid thermos-type bottle, but it's more than good enough for me, and I like soft. The Swagman, though, is the big trick here. Because it has jaws separated by a little air space, it can clamp onto a mesh seat -- which is what my trike and most other trikes have -- without damage.

One of these little rigs on each side gives me 48 oz. of drinking water close at hand. I ride for fun more than for fitness, so that's all the water I'm likely to need. And if I need more, I have four rugged (but uninsulated) 20 oz. Rubbernaid drink bottles I can also carry, either in added Swagman holders or in one of the packs I have to carry this and that. Or just held on my rear carrier rack with bungee cords. Versatile!.

I know that on a high-tech trike I'm really supposed to carry a Camelbak Hydration Pack, but then I'd probably have to wear spandex, too. But I use my drink bottles when I'm not on the trike, too -- like in may office. Over the years I've had a spill or two that messed up keyboards. A sealed bottle is a safety thing there, on my bedside table, and almost anywhere else.